Thank you for visiting our site and we look forward to being of service to you in Africa soon.

Also have a look at some of the other interesting links provided which we believe will interest you: 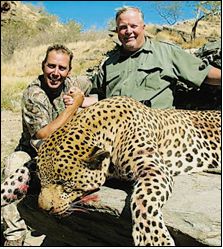 Is this a big leopard or what?

This magnificent leopard was shot during October 2008 in Namibia, and it launched a chain of controversy and reaction from all walks of life. As can be expected anti-hunting lobbyist are up in arms about this hunt and have raised their outrage in all the local newspapers.

It is to be expected perhaps, as this is one of the finest trophies taken recently. The question however is if this was uncalled for or not. Read the following post and share your views with us right here.

The leopard was shot on a local cattle farmers property in Namibia, due to the fact that the farmer had reached a stage of beyond sanity. This cat was responsible for more than 50 cattle kills during the last year and the farmer had suffered huge financial losses subsequently. The farmer ended up applying for the necessary permits, and invited a professional hunter to have the animal shot by an International client.

Lobbyists claimed that the leopard’s gene’s were now lost forever and are outraged by the incident, claiming that the leopard could have been removed, instead of being shot and killed. The leopard is well over ten years old, so it also has seen and done it’s fair share of mating, so all is certainly not lost.

The farmer’s plea is that he had suffered financially and by having the leopard removed instead of hunted, would not have reimbursed him for his losses. To the contrary it would have cost him more and risking a capturing attempt with this monster was certainly not his view of another day at the office. The international hunter paid his due’s and at least the farmer received some financial return for his losses.

What is your opinion, should the cat have been shot or captured and relocated?

Share your comments with us and let’s see what your views are?

Please leave us your comments by clicking on the add comment button on this page!