Bow hunting is becoming increasingly more popular each and every day. With guys like Jim Burnworth & Ray Bunney who visited us in early 2013 for an entire month, we truly experienced that bow hunting is serious business. 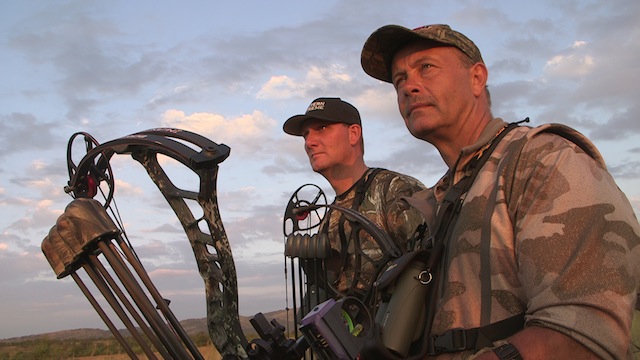 “Often we (outdoor writers) get invited to a ‘writers’ hunt. Normally there is a reason why the outfitter can’t book hunts for that particular week: the rut is over, full moon, it’s hot, or some other reason that makes the hunting slow.. Whenever you go you are optimistic but many times are disappointed.”

“We arrived at the Bar None Ranch in the afternoon and it was too late to go hunting.  When we got up this morning we were filled with anticipation but not knowing what lay ahead.”

“Jay and I and the guide and cameraman Derrick were at our blind at daylight. Deer showed up almost immediately. We saw a dozen deer in the first 15 minutes, one of which was a wide 9-point buck that had been hit with an arrow in the leg, It was healed over but ranch had it on their management list.”

“There were several broken racked bucks, and frankly I thought that was what we would be expected to shoot, but that was not the case. Instead, Derrick pointed out two very mature bucks that were 8-points, in addition to the wide 9-point.”

“The bucks were moving  all the time as other deer were coming into the vicinity. The 9-point made aggressive posturing at one the other bucks and when their interaction was over the 9-point was standing broadside at 22 yards.”

“Joe was already at full draw and put the pin on the bucks heart and released the arrow. The broadhead went through the top of the heart and the buck kicked and ran across a nearby creek and went out of  sight 60 yards.” 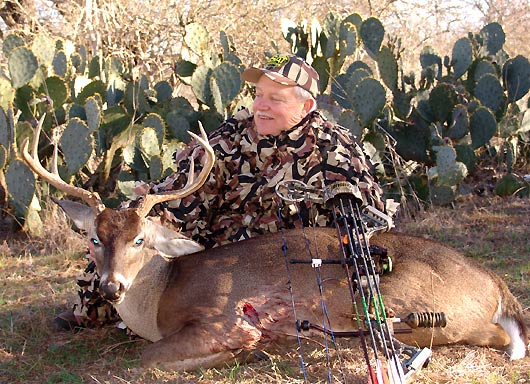 Joe was shooting the new Jenniings Strike at 58 pounds. “The shot was fast and quiet,” related Joe. “The arrow was through him before he knew what happened. I used a Grim Reaper Razor Tip and the entrance and exit cuts were equally large and had complete penetration.”

His bowsight was a Trophy Taker with very bright pins, which Joe likes, especially in a ground blind. Joe also has a STS stabilizer that “keeps your left arm out of the way of the shot and it stops the string, which makes the bow even quieter.”

Joe continued, “Jay and I stayed to take some general hunting pictures around the blind. Just as they were leaving Jay spotted a Javelina walking on a trail toward the bind. The javelina saw us and ran across the creek.

We squatted down behind some trees and the javelina circled us. He stopped at under 20 yards.”

Joe’s arrow flipped the javelina over. Joe shot it again, with the arrow he had killed the deer with, and the hunt was over.

“At the end of the first morning skepticism had changed to amazement at the number of deer and the quality of bucks we saw. Even though it was a management hunt the bucks that we culled were right at P&Y quality. Bar None Ranch is a good phrase for this ranch. I am very impressed with what I have seen. We saw dozens of trophy bucks, wild turkeys, javelina and other wild game … in the first day.” 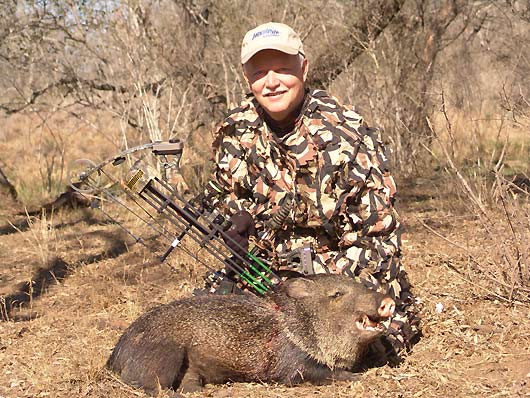