Trophy hunting can play an essential role in the conservation of African wildlife, according to a growing number of biologists. Now some experts are calling for a program to regulate Africa’s sport-hunting industry to ensure its conservation benefits. 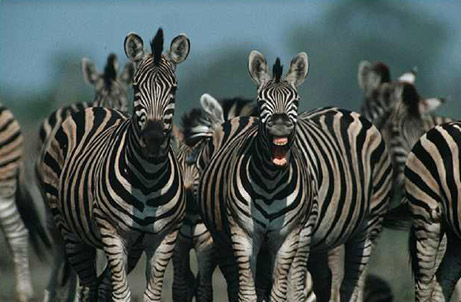 According to a recent study, in the 23 African countries that allow sport hunting, 18,500 tourists pay over $200 million (U.S.) a year to hunt lions, leopards, elephants, warthogs, water buffalo, impala, and rhinos.

Private hunting operations in these countries control more than 540,000 square miles (1.4 million square kilometers) of land, the study also found. That’s 22 percent more land than is protected by national parks. As demand for land increases with swelling human populations, some conservationists are arguing that they can garner more effective results by working with hunters and taking a hand in regulating the industry.

Sport hunting can be sustainable if carefully managed, said Peter Lindsey, a conservation biologist with the University of Zimbabwe in Harare, who led the recent study. “Trophy hunting is of key importance to conservation in Africa by creating [financial] incentives to promote and retain wildlife as a land use over vast areas,” he said. In an upcoming edition of the journal Conservation Biology Lindsey and an international team of colleagues call for a plan to increase the conservation benefits of sport hunting, including a certification program to more tightly regulate the industry.

“To justify the continued existence of

Member Login
areas in the context of increasing demand for land, wildlife has to pay for itself and contribute to the economy, and hunting provides an important means of achieving this,” Lindsey said. Hunting’s Checkered Past In order to be certified under Lindsey’s proposed plan, hunting operations would have to prove their commitment to animal welfare, careful management of hunting quotas, wide-ranging conservation objectives, and the development of local communities. “The time has come for greater scrutiny from scientists to promote maximum conservation benefits from hunting,” Lindsey said.

“There should also be a greater effort from the hunting industry to self-regulate and ensure that unscrupulous elements are weeded out.” Trophy hunting has a bad reputation in the developed world, due in part to indiscriminate hunting by early European settlers, Lindsey observed. 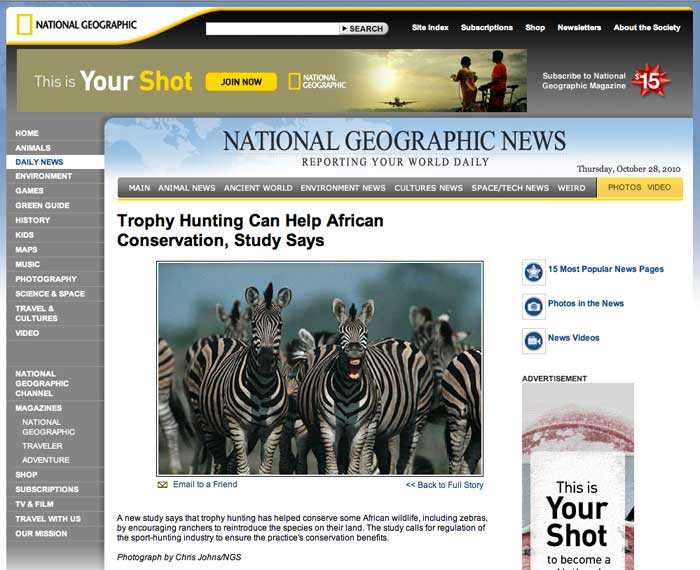 Reckless hunting resulted in the extinction of species such as the quagga (a cousin of the zebra) and led to the massive decline of others, including the elephant and black rhinoceros.

But hunting has also been credited with facilitating the recovery of species, Lindsey’s team argues in its paper. The southern white rhinoceros grew from just 50 animals a century ago to over 11,000 wild individuals today, because hunts gave game ranchers a financial incentive to reintroduce the animal, the authors write.

“The idea of trophy hunting as a conservation method is an extremely tricky and contentious issue that generates disparate views from people all of whom claim to want the best for animals,” said Marc Bekoff a behavioral ecologist at the University of Colorado in Boulder and author of The Emotional Lives of Animals. Bekoff said that while the certification program is a good idea, he has difficulty believing it could work well in practice, because the bureaucracies involved in such regulation would be complex.

“It’s hard to believe that the situation has reached the point where killing is the best way to conserve,” he said. “There have to be more humane alternatives.” In late February South Africa announced long-awaited legislation against so-called canned hunting, in which animals are shot in cages or are tranquilized and released shortly before being gunned down. The ban will take effect June 1 under a law that also bans hunting with bows and arrows.

Please share your thoughts and comments with us on this paper, by submitting your comments below. Real Africa Safari Holdings is proud of our role we play in conservation, and believe that we as professional, and ethical hunters have made a huge impact on conserving wildlife in the area’s we manage – for generations to come.