If you haven’t shot with a Custom Hart Rifle yet, you ain’t seen nothing yet. Hart Rifle’s are surely some of the best and most accurate rifle’s you will ever own. The Hart family are fourth generation rifle builders, and these guy’s really know their stuff.

They hunt with us every year in Africa and have taken some of the most spectacular shots at very long distances. In September 2008, Bobby Hart them joined us on a Hunting Safari in Namibia, and the Hart Guns were put to the test in the great Kalahari.

Long distance shots of more than 700 yards at Springbuck were easily taken with no misses. The impresssive thing about this, was that we found the animals remained grazing (except of course for the target) after the shots. They simply did not know where the shot came from, and due to all Hart rifle’s being fitted with muzzle breaks, the shot and sound doesn’t carry.

As Bobby says – using a Hart rifle:  “They can run, but they will just die tired”

Check out the next video, and you will see what type of shooting we are talking about. The following video is the type of shots these guy’s do:

HART RIFLES ARE ONE OF THE BEST AND MOST ACCURATE HUNTING RIFLES IN THE WORLD:

Most propably the most well known calibre in the HART stable is their 30 Hart (300). Bobby Hart has personally hunted with us several times in Africa, and always brought his trusted 30 Hart along. This rifle has simply out-shot any other rifle in both accuracy and long distance, time and time again.

The Hart family however makes a wide range of rifles and it is best if you contact us or Bobby them for some advice and to choose the gun best suited for your needs.

Should you need more information on the Hart Rifles, you have the following options: 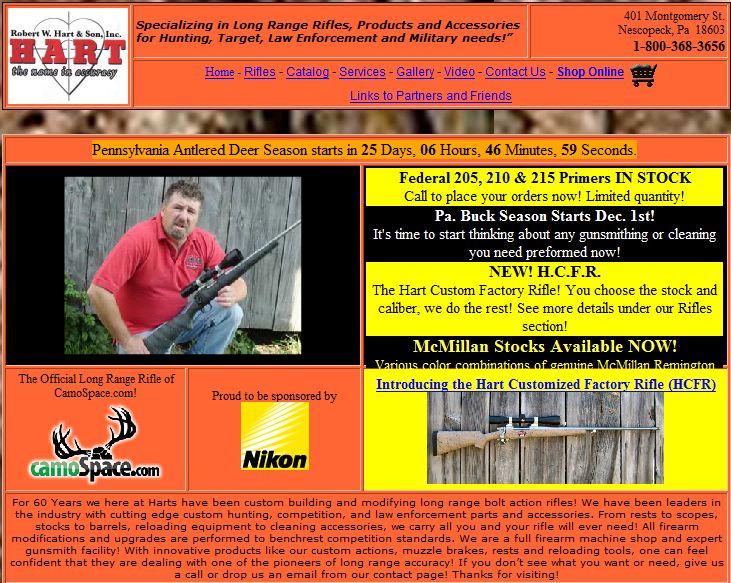 Seen our Trophy Gallery yet?