This a long article, however, we believe an informative one and you should enjoy this if you are hunting fanatics like we are. Most seasoned hunters and gun fanatics may find this article as old news, however, if you are a hunter who packs out the rifles once a year, and want to improve your general knowledge, then you will find this article interesting and informative.

This article is commissioned for JOE ‘the ordinary guy’ (Yes not JOE THE PLUMBER – Joe ordinary).The purpose of this article is to give Joe ordinary guy some useful information, so that he doesn’t have to put up with the sniggers from the gunship seat warmers when he walks in and asks for a pack of 120 grain round nose soft-point bullets in ,243 calibre for his annual deer (or springbuck) hunt, only to be told that there is no bullet of that weight in ,243 calibre; even if there were, it would not not be the right bullet for shooting at long range on the plains. OK, I’ll take whatever you’ve got – “a bullet is a bullet, isn’t it?” (more sniggers).

Next time, armed with the bit of know how from this article, you will be better informed and need not fear any derisive looks or “knowing glances” as you walk into the gunship and order the right ammo for the right job. So, the experts can skip this article and read something else on their level, and Joe, you can get yourself that cup of coffee and enjoy the reading.

As professional hunters in Africa we often end up in culling/harvesting/cropping operations. It’s a job that needs to be done, and one which we like to do as humanely and quickly as possible, keep wounding down to an absolute minimum. As written by Cleve, we also very quickly in this process and operations, came to learn that two bullets of exactly the same calibre and mass (weight) can in fact perform very differently. We do a lot of culling in Namibia, of mostly springbuck and gemsbuck, and we were soon forced to learn more about ballistics and what accuracy and efficiency is all about.

Thanks to authors such as Cleve Cheney, we can all sigh a sigh of relief and get back into those gun shops, talk the talk and get the right stuff for the right job. In order to do that, we need to learn a bit of the technical jargon used in the expert circles.

Firstly, a bullet is not a cartridge and a cartridge is not a bullet. Huh? OK, let’s put an end to the confusion. A bullet is the projectile that flies out of the end of the barrel (muzzle) when a shot goes off. A cartridge consists of four basic components: the bullet (the part we have just spoken of), the case (usually made of brass), propellant or powder (no it’s not “gunpowder”), which burns (no it does not “explode”) to produce the gas, which forces the bullet down the bore, and a primer (which does explode), used to ignite the propellant. Cool, now that we know what we are talking about let’s carry on.

The way in which the bullet now travels towards the intended target (exterior ballistic performance) and the way it reacts when it hits the target (terminal ballistic performance) are determined to a significant degree by the design features engineered into the bullet shape, material and construction. We will now examine two of these design parameters – ballistic coefficient and sectional density. Now, don’t stop reading! This is not just about some useless, intellectual good-for-nothing know-how; it has some very practical application when you grasp the concepts.

Let’s start with ballistic coefficient. Ballistic coefficient (BC) is basically a measure of how streamlined a bullet is, which determines how well (or poorly) it flies through the air. Air acts like water and the way it flows around a bullet determines how easily the bullet flies through the air. The airflow can be smooth or turbulent. Turbulence is caused by airflow separation and the creation of vortices. Airflow turbulence causes a phenomenon called “drag”, which works in the opposite direction to the bullet’s line of motion and tends to hold the bullet back. It’s like something holding onto your shirt while you are attempting to run away from them. Bullets are thus designed for different purposes and have different shapes.

The shape or profile, therefore, determines a bullet’s aerodynamic efficiency. The more dynamic the shape of the bullet, the lower the drag factor. A lower drag factor translates into a flatter trajectory. The larger the ballistic coefficient, the more efficient the bullet’s performance in the air. The ballistic coefficient increases as one moves from the flat nose to round nose to spire point to boat-tailed spitzers.

Now you might well ask: If bullets with a higher ballistic coefficient have flatter trajectories, why are all bullets not designed this way? Good question; we will answer it a little later on.

Coefficient of form, or form factor, is a mathematical number that relates to a bullet’s shape, smoothness and shape at the base. The form factor compares the shape of a bullet being tested to the shape of a standard bullet used in a particular ballistic table. Ouch. This is getting a bit complicated. Don’t panic there is good news.

Near the turn of the last century, many tests were done by the Krupp Company in Germany to determine the bullet drop characteristics of so-called standard bullets. Soon after the Krupp data had been published a Russian colonel named Mayevski constructed a mathematical model for the drag deceleration of a standard bullet. The standard bullet was one inch in diameter, weighed one pound and had a ogive head of 8 calibres radius. Colonel James M Ingalss of the US army later used the Mayevski’s mathematical model to compute his now famous ballistics table.

The standard Krupp bullet proved to be such a good model for use in calculating ballistics of most bullets used in sporting firearms, that today most of the major bullet companies use the Ingalls or similar tables together with test firings of production bullets to compute ballistics’s coefficients for their bullets. These coefficients are published in most of the major reloading manuals. Some ammunition manufacturers publish the ballistic coefficient of their bullets, most instead include ballistic charts in their sales literature and catalogues that show drop and remaining down range velocity for bullets used in each cartridge that they manufacture. So, you don’t have to do the maths.

Now, back to the question you asked earlier on. If bullets with a higher ballistics’ coefficient have flatter trajectories why are all bullets not designed this way?

The answer is that bullets are designed for different applications. Bullets with a high BC work well when shooting animals at long ranges. The trajectory remains reasonably flat and by the time the bullet arrives at the intended target it will still be in the kill zone. When trajectory becomes pronounced, accuracy (at long range) becomes more difficult. Bullets of identical weight, calibre and sectional density (see later) will have decidedly different trajectories. Bench rest shooters who shoot at long range generally prefer flat shooting boat-tail spitzers as opposed to round-nose bullets for example. Hunters shooting on open plains, where it is difficult to get closer than 300 yards from their quarry, would also go for spitzers, spire points or boat-tailed bullets. But bullets with a high BC do have a disadvantage and that is in their “brush busting” capabilities. They are easily deflected by vegetation and this is where round-nose bullets come into their own. So, if you are hunting in areas of dense bush where you will be shooting at much closer distances (in many cases under 100 yards) where range and bullet drop are not as critical and you might have have to shoot through vegetation, then a round-nose bullet would be a better option. Some firearms, such as those with tube magazines, also require the use of round-nose bullets.

The BC is however, not based on the nose shape alone. It is based on nose shape plus sectional density. The reason is that a short bullet with a sharp nose will drop faster than long bullet with the same nose. The BC therefore describes the performance of a bullet as a whole. The higher the BC, the flatter a given bullet will shoot.

Sectional density is the ratio of a bullet’s weight (mass) to its core diameter expressed as a number. For a given calibre the lighter (and shorter) the bullet, the lower the SD, the heavier (and longer) the bullet, the higher it’s SD. The SD gives a basic idea of a given bullet’s performance characteristics, because a long bullet retains velocity, while a shorter bullet sheds velocity.

Because sectional density relates strictly to weight, not shape, it means that the most blunt-nosed bullet has the exact same SD as the most streamline bullet of that same weight and calibre.

SD is important because it has a significant effect on penetration. All other variables being equal (like impact velocity, bullet design and material, etc) the higher the SD number, the better the bullet’s penetration. In other words, a small diameter bullet of a given weight tends to penetrate better than a large diameter bullet of the same weight, because it concentrates the same force on a smaller area of the target. Penetration is important because the bullet must get well inside an animal to disrupt the functioning of it’s vital organs.

So, let’s wrap this up and summarize the effects that ballistic coefficient and sectional density could have on bullet performance. 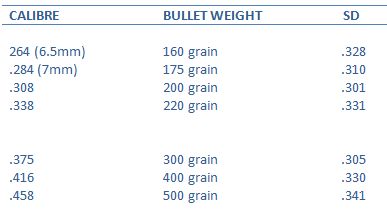 Now, just when we Joe ordinary guys were beginning to get a hold on things, some experts throw us a curve ball, saying that sectional density theory is only applicable to a restricted range of bullet weights. Ah, well, we will leave it to the guys with the white lab coats to sort out.

In the mean time, happy hunting and God bless.